Ranveer Singh and Deepika Padukone are one of the most adored couples of Bollywood, who also enjoy a huge fan following on social media. The talented ‘Simmba’ star recently took to Instagram to share a selfie from the sets of his film ‘Dil Dhadakne Do’ as it completed 5 years today.
While fans had been going gaga over Ranveer’s post, director Zoya Akhtar commented requesting the superstar to take her back but what grabbed our attention was Deepika Padukone’s reply on the comment which read as ‘me too’ with a few emoticons. Check out their social media banter here: 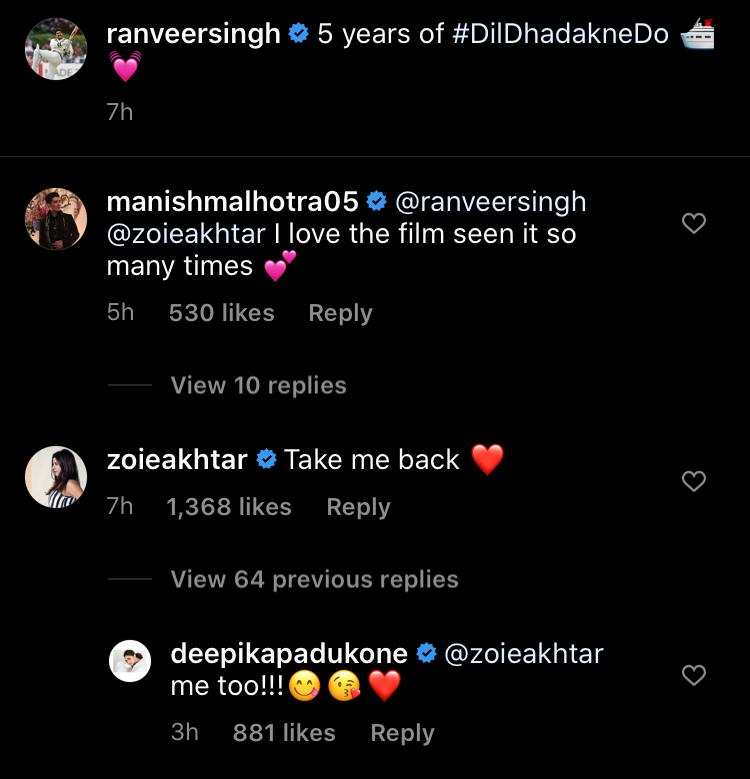 The film which also starred Priyanka Chopra, Anil Kapoor, Farhan Akhtar, Shefali Shah, Rahul Bose, Vikrant Massey and many others was well appreciated by the audience and critics when it was released. Not only that it also turned out to be a hit film at the box office as well.

Meanwhile, on the professional front, Ranveer and Deepika will soon be seen together in Kabir Khan‘s sports drama ’83’. The couple, who have done quite a few films together, will be seen together on the silver screen for the first time post their marriage.