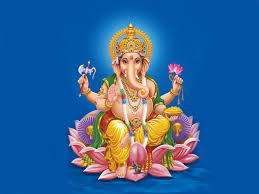 Ganesh Chaturthi is celebrated annually to mark the birth of Lord Ganesha, the God of new beginnings and a fresh start. The festival falls in the month of Bhadra, according to the Hindu calendar and in August/September according to the Gregorian calendar. This year, the ten-day celebrations will begin on August 22. Lord Ganesha is considered to be a symbol of wisdom, writing, travel, commerce and good fortune. He is also addressed as Gajanana, Ganesh, Gajadant that are among his 108 names.

Legend tells the tale of Goddess Parvati who made baby Ganesha using sandalwood paste and asked him to guard the entrance while she took a bath. When Lord Shiva wanted to enter, Ganesha would not even allow him to pass through. Lord Shiva, enraged by this, severed the child’s head. When Goddess Parvati realised what had happened, she was overwhelmed and heartbroken. This is when Lord Shiva promised that he would bring baby Ganesha back to life. He went on to instruct his followers (ganas) to search for the head of the first living creature they could find to replace on Ganesha’s body. However, the ganas could only find a baby elephant’s head. That is how Lord Ganesha came back to life with the head of an elephant. Lord Shiva named him the leader of the ganas, or Ganapati.

The excitement for this 10-day long festival begins weeks before Ganesh Chaturthi, with several people making clay idols of Lord Ganesha and painting them. There is more consciousness in terms of organic choices for the Ganpati idol, as the erstwhile methods have been found to deeply affect marine life and pollute the environment.

A Mumbai-based group is offering an alternative to Plaster of Paris (PoP) via seed balls placed inside Ganesh idols that can grow into plants after immersion. Sprouts Environment Trust, since 2015, has run an initiative called God Save the Ocean using ingredients such as corn and vegetable powder in idol-making that can easily dissolve in sea water and get consumed by marine organisms. The idols are organically-coloured with substances such as turmeric, chandan and geru (coloured soil) to protect the aquatic biodiversity. These eco-initiatives are also being followed in Indore and Lucknow where Ganpati idols have been made using tulsi seeds, giloy and more.

Other initiatives include Chocolate Ganesha, proceeds of which are often distributed amidst the underprivileged.

Originally, Ganesh Chaturthi is known to be celebrated in a large way in Maharashtra and Andhra Pradesh, but the festival and festivities have spread far and wide, with devotees celebrating in other parts of the country with equal fervour.

The festival begins with Pranapratishhtha, which consists of the chanting of mantras by a priest. Offerings which are known to be loved by Lord Ganesha are placed infront of his idol. These include modak, shrikhand, payasam, coconut rice, motichoor laddoo and other sweets.

Devotees throng to temples and special pandals set up for Ganesh Chaturthi to pay their respects to the Lord Ganesha. People also sometimes choose to bring Ganpati home ahead of the festival and host him for the 10-day festivities.

On the tenth day, Lord Ganesha’s statue is immersed in water, known as Ganpati Visarjan. Devotees chant Ganapati Bappa Morya, paying respect to him as he is seen off, taking all our worries away and leaving blessings behind. 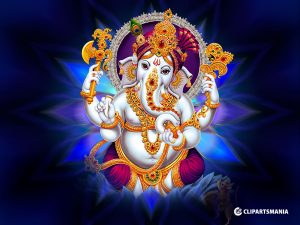 Ganesh Chaturthi, in Hinduism, 10-day festival marking the birth of the elephant-headed deity Ganesha, the god of prosperity and wisdom. It begins on the fourth day (chaturthi) of the month of Bhadrapada (August–September), the sixth month of the Hindu calendar.

At the start of the festival, idols of Ganesha are placed on raised platforms in homes or in elaborately decorated outdoor tents. The worship begins with the pranapratishtha, a ritual to invoke life in the idols, followed by shhodashopachara, or the 16 ways of paying tribute. Amid the chanting of Vedic hymns from religious texts like the Ganesh Upanishad, the idols are anointed with red sandalwood paste and yellow and red flowers. Ganesha is also offered coconut, jaggery, and 21 modaks (sweet dumplings), considered to be Ganesha’s favourite food.

At the conclusion of the festival, the idols are carried to local rivers in huge processions accompanied by drumbeats, devotional singing, and dancing. There they are immersed, a ritual symbolizing Ganesha’s homeward journey to Mount Kailas—the abode of his parents, Shiva and Parvati.

Ganesh Chaturthi assumed the nature of a gala public celebration when the Maratha ruler Shivaji (c. 1630–80) used it to encourage nationalist sentiment among his subjects, who were fighting the Mughals. In 1893, when the British banned political assemblies, the festival was revived by the Indian nationalist leader Bal Gangadhar Tilak. Today the festival is celebrated in Hindu communities worldwide and is particularly popular in Maharashtra and parts of western India. 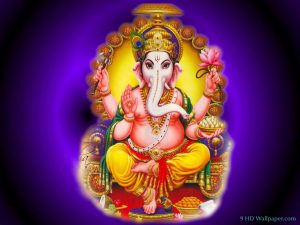 What is the story behind the tradition of Ganesh visarjan?

Story of Ganesha Ganesha Chaturthi is the festival celebrating the rebirth God Ganesha. The elephant-headed God has an interesting story. He was created in a completely human form by the Goddess Parvati. She moulded him from clay or the earth from her own body (versions vary) and gave it life. She then tasked him to stand by the door of her palace as she bathed and not let anyone in. When her own husband, the great God Shiva tried to enter the human form barred his path. Shiva was furious at being denied entry into his own home and an awesome battle followed. Shiva won the battle and beheading Ganesha. But he immediately felt guilty and he knew his wife would be furious. So he sent his men to bring back the head of the first creature they came across. They met an elephant with one tusk who happily sacrificed his head for the honour.
Shiva bought Ganesha back to life and thus his story is considered one of rebirth and regeneration. Ganesha was made the head of Shiva’s followers, the Ganas, hence his name, Ganpati. He is worshiped as a bringer of luck and prosperity. He was also the God to help the Devs and humans in the preservation of balance by bringing obstacles to block the progression of evil and removing obstacles from the paths of goodness.

How Ganesha Chaturthi is celebrated
Ganesha Chaturthi is celebrated on the anniversary of the day Ganesha was revived in his elephant-headed form. Around this time there is a huge celebration where believers ‘bring’ Ganesha into the house, or temple, or Pandal (temporary shrine) as a guest in the form of an idol. He is worshipped with elaborate rituals for 10 days, so as to invoke his blessings and when his stay is over, the statue is ceremoniously immersed in a water body. This is called visarjan.

Why is Ganesh Visrjan done?

The ritual is done to signify the birth cycle of Lord Ganesha; just as he was created from clay/Earth, his symbolic statue is as well. The idol is immersed in water so that Ganesha may return to his home after his ‘stay’ at the devotees’ home or temple where the Ganesha Chaturthi rituals are conducted. While it might seem like a good idea to skip the visarjan and keep hosting the God for fortune and prosperity, it is said that the power that suffuses the statue after 10 days of worship is all a human can bear. So it is not to be kept longer.

Since discarding or breaking would be disrespectful, the statue is ritualistically immersed in the water so it may break down to the clay from whence it came. Some statues are prepared as such that its constituent materials actually benefit the ecosystem they enter.

However in recent years the immersion of Ganesha idols made of non-biodegradable materials and the use of poisonous substances in the paints has led to pollution of water bodies and takes away from the positive symbolism and impact of the ritual. As we pray to Lord Ganesha, we must remember to do so responsibly. 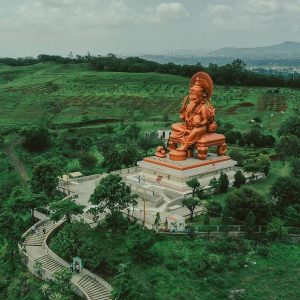 During the Ganesh Chaturthi festivities, we present to you the Birla Ganpati Temple which is at a few kms distance from Pune. The Ganpati idol is huge & one cannot miss it when you are on the NH4 as you reach the Somatane Toll Plaza @maha_tourism
PC: Jagdish Patil

Credits to – India in Trinidad & Tobago (High Commission of India, Port of Spain)