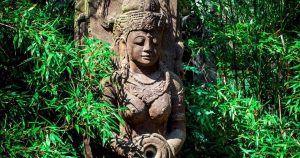 In India, the temples called devalaya or vimana. In Bali they are called pura. Why are temples in Java called candi?

Candi means ‘old throne’ and is one of the names of Durga (known as Sang Hyang Bathari Durga in Java), the Mother Goddess, who is born from the Cosmic energy to save the world threatened of destruction by the demons. She is called Chandika, Ambika or Durga.

She was especially venerated by the Javanese common people, who brought offerings to her, whereas the kings and aristocracy venerated the Shiva linga in the most sacred part of the temple. With time, her name, Candi, became the generic name for the temple itself.

She was so popular in Indonesia that the Museum Nasional in Jakarta today has 32 Durga statues. More are regularly discovered. At least 135 ancient statues of Durga have been found in Java, where she is known by the common people as Loro Jonggrang (“slender maiden”). The most famous temple in Java is the Candi Lara Jonggan of Prambanan, where a murti of Durga stands in the northern niche.

Durga is the wife of Sada Shiva. Durga in Java is exclusively found in candis dedicated to Shiva.

Sang Hyang Bathari Durga today is worshiped either as Tara or under her manifestation as the Queen of the South Seas, Nyai Lara Kidul.

Durga in the holy scriptures

The word Durga in Sanskrit literally means “impassable”, “invincible, unassailable”, “beyond defeat”. It is related to the Sanskrit root durg which means “fortress, something difficult to defeat or pass”.

Durga is further described in the Devi Mahatmya, the Markandeya Purana and the Devi-Bhagavata Purana. The Devi Upanishad and other Shakta Upanishads also contain the philosophical and mystical aspects of Durga as Devi, identifying her to be the same as Brahman.

One of the most important texts of Shaktism is the Devi Mahatmya, which celebrates Durga as the Supreme Being and the Creator of the Universe. The Devi Mahatmya is considered by Shakta Hindus to be as important as the Bhagavad Gita.

‘’I have created all worlds at my will without being urged by any higher Being, and dwell within them. I permeate the earth and heaven, and all created entities with my greatness and dwell in them as eternal and infinite consciousness.’’ — Devī sūkta, Rigveda 10.125.8 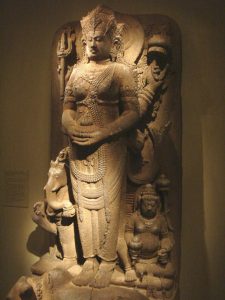 Navadurga: the 9 Forms of

The Navadurgā (‘Nine forms of Durga’) are the nine manifestations of Durga, who is especially worshiped during Navratri, when each of the nine forms is venerated respectively each night: Shailaputri, Brahmacharini, Chandraghanta, Kushmanda, Skandamata, Kaalratri, Katyayani, Mahagauri and Siddhidhatri.

Each manifestation of Durga is known by her respective name, governing planet, iconography, mantra for invocation (usually repeated 108 times at each sitting during the period of Navratri), dedication day for Navratri and respective prayers.