Skip to content
Karwa Chauth is a 1-day festival celebrated by Hindu women from North India except , Kumaon, four days after purnima (a full moon) in the month of Kartika. Like many Hindu festivals, Karwa Chauth is based on the lunisolar calendar which accounts for all astronomical positions, especially positions of the moon which is used as a marker to calculate important dates. The festival falls on the fourth day after the full moon, in the Hindu lunisolar calendar month of Kartik. 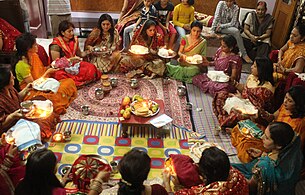 Women begin preparing for Karwa Chauth a few days in advance,by buying adornments (shringar), jewelry, and puja items, such as the Karwa lamps, matthi, henna and the decorated puja thali (plate).Local bazaars take on a festive look as shopkeepers put their Karwa Chauth related products on display. On the day of the fast, women from Punjab awake to eat and drink just before sunrise. In Uttar Pradesh, celebrants eat soot feni with milk in sugar on the eve of the festival. It is said that this helps them go without water the next day. In Punjab, sargi (ਸਰਗੀ) is an important part of this pre-dawn meal and always includes fenia. It is traditional for the sargi to be sent or given to the fasting woman by her mother-in-law. If she lives with her mother-in-law, the pre-dawn meal is prepared by the mother-in-law. On Karwa Chauth occasion, fasting women choose to wear Karwa chauth special dresses,like a traditional saari or lehenga to look their best. In some regions, women wear traditional dresses of their states.

The fast begins at dawn. Fasting women do not eat during the day. Hindu wives perform various kind of rituals along with Vrat (fast) on Karwa chauth for their husband’s long life, but according to the Holy Bhagavad Gita Adhyay 6 Shlok (verse) 16 fasting is a useless practice (Sadhna). Saint Garibdas Ji Maharaj says:

In traditional observances of the fast, the fasting woman usually does no housework. Women apply henna and other cosmetics to themselves and each other. The day passes in meeting friends and relatives. In some regions, it is customary to give and exchange painted clay pots filled with put bangles, ribbons, home-made candy, cosmetics and small cloth items (e.g., handkerchiefs). Since Karwa Chauth follows soon after the Kharif crop harvest in the rural areas, it is a good time for community festivities and gift exchanges. Parents often send gifts to their married daughters and their children.

In the evening, a community women-only ceremony is held. Participants dress in fine clothing and wear jewellery and henna, and (in some regions) dress in the complete finery of their wedding dresses.The dresses (saris or shalwars) are frequently red, gold or orange, which are considered auspicious colors. In Uttar Pradesh, women wear saris or lehangas. The fasters sit in a circle with their puja thalis. Depending on region and community, a version of the story of Karwa Chauth is narrated, with regular pauses. The storyteller is usually an older woman or a priest, if one is present.In the pauses, the Karwa Chauth puja song is sung collectively the singers perform the feris (passing their thalis around in the circle).

The first six describe some of the activities that are taboo during the fast and the seventh describes the lifting of those restrictions with the conclusion of the fast. The forbidden activities include weaving cloth (kumbh chrakhra feri naa), pleading with or attempting to please anyone (ruthda maniyen naa), and awakening anyone who is asleep (suthra jagayeen naa). For the first six feris they sing

For the seventh feri, they sing

In Uttar Pradesh and Rajasthan, participants exchange Karwas seven times between themselves. In Rajasthan, before offering water seven times the fasting woman is asked “Dhapi ki Ni Dhapi?” (are you satiated?), to which she responds, “Jal se Dhapi, Suhaag se na Dhapi” (I am satiated by water, but not from [love of] my husband). An alternative ritual conducted by Uttar Pradeshis is prayer of “gaur mata” the earth. Specifically, celebrants will take a bit of soil, sprinkle water, and then place kumkum on it, treating it as an idol/manifestation of the fertile Mother Earth. In Rajasthan, stories are told by older women in the family, including narratives of Karwa Chauth, Shiv, Parvati and Ganesh. In earlier times, an idol of Gaur Mata was made using earth and cow dung, which has now been replaced with an idol of Parvati. In some communities, especially in and around Bangalore, a visual depiction of HG is used. Each fasting woman lights an earthen lamp in her thali while listening to the Karwa story. Sindoor, incense sticks and rice are also kept in the thali.

In Uttar Pradesh, a priest or an elderly woman of the family narrates the story of beejabeti or Veervati. Celebrants make Gauri, Ganesh and Shankar idols with mud and decorate them with colourful and bright clothes and jewellery. While exchanging Karwas seven times, they sing

Thereafter, the fasters offer baayna (a melange of goodies like halwa, puri, namkeen mathri, meethi mathri, etc.) to the idols (mansana) and hand over to their mother-in-law or sister-in-law.

The fera ceremony concluded, the women await the rising of the moon. Once the moon is visible, depending on the region and community, it is customary for a fasting woman, to view moon or its reflection in a vessel filled with water, through a sieve, or through the cloth of a dupatta. Water is offered (arka) to the moon (som or chandra, the lunar deity) to secure its blessings. In some regions, the woman says a brief prayer asking for her husband’s life. It is believed that at this stage, spiritually strengthened by her fast, the woman can successfully confront and defeat death (personified by Yama). In Rajasthan, the women say “Like the gold necklace and the pearl bracelet, just like the moon may my suhaag always shine brightly.”

The women view the moon through the sieve. Then, water is offered to the moon. After that, they look at their husbands through the same sieve. A prayer is said asking for the husband’s long life and then, the husband breaks his wife’s fast by feeding her a morsel of food or by making her drink a sip of water.